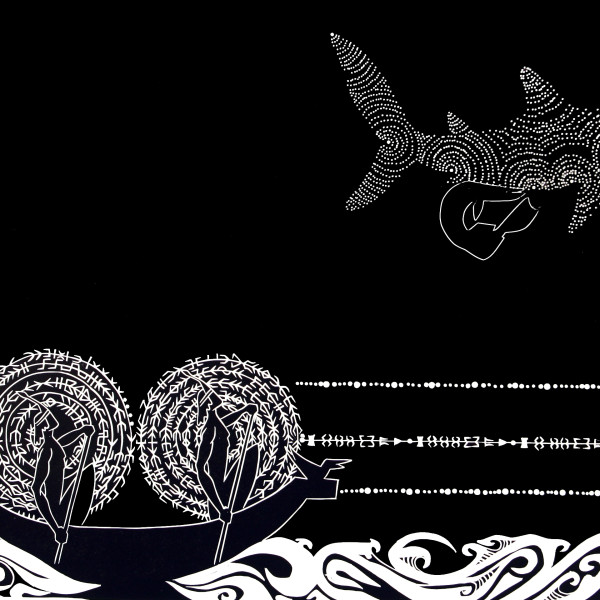 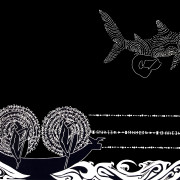 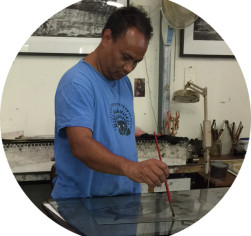 Tommy is a descendent of the Eastern Torres Strait Islands, Australian Aboriginal, Papua New Guinea, Pacific Islander and Asia. He speaks Torres Strait Creole and Australian English. He was born in Townsville and livd there as an infant before moving to Brisbane, Thursday Island and Cairns.

He considers himself an artist who is Indigenous, not as an Indigenous artist.  His wide ranging arts practice includes sculpture, carving, print, painting, installation art, digital multimedia, and anything that grabs his interest.  He also writes poems.

Pau’s art re-evaluates the impact of the past on present lives by developing a visual concept and language to express and engage with conflicting and subsumed histories, and present day applications of the past without desecrating what is sacred.

His intention is to invite viewers to a closer understanding of the continuing roles in narratives of our memory, time, absence, and location and how Indigenous people are represented.

Much of his work is conceptual, influenced and inspired by the people, stories, places; skills of and connections to his Islander, Aboriginal, Papua New Guinea, Pacific and Asian heritage. His work explores concepts that underpin culture and then develops works around them.

One of his common methodologies is to approach a composition as a designer and arrange subjects and objects to encourage a viewer to read it to find themselves as part of the work.  Art works comprising multiple objects are experiments in understanding how viewers can travel around a work and in this process move their position back and forth, flickering between past and present, and hopefully, personal memory.

Pau’s art works are at an investigations stage evolving from personal considerations, places he has lived or been to. Mostly the memory, stories told, loss, denial and the potency of the past within his own family. Each work has been built from the outcomes of the last, and represents a claiming to culminate styles that I can be known for or be comfortable producing.

Pau was taught about the need to keep culture strong through cultural practice by his father. He has a strong commitment to keeping old traditions alive and believes that culture must remain true to the past and move with time to exist in the future. Tommy has vast experience in the arts and his art forms of choice include printmaking, painting and three dimensional sculptures. He is passionate in representing Indigenous arts and artists in general and the protection and true representation of Torres Strait Islander arts and culture.

Tommy Pau is a former member of the Board of the Cultural Centre-Townsville, a current member of Umi Arts and Umbrella Studio Contemporary Art and Murris in Ink printmakers. Some of his major life achievements include completing a Bachelor of Education and becoming a semi-finalist in the Telstra Art Award.  Currently he is completing an Arts degree at James Cook University.

Umbrella is about to move websites! The online store and membership renewals are currently unavailable, we will update you with new options on the new website.